On the west coast of the European continent, at Brittany’s tip, Finistère’s string of lighthouses shine as unshakeable witnesses to the tides that sculpt the beautiful landscapes of the Iroise Sea.
The port of Brest, in northwestern France, together with one of the two French naval bases, Brest Arsenal, located in the Finistère department, litterally “Department of the End of the World”, are linked to the Atlantic Ocean (called the Iroise Sea at this point) by the Goulet de Brest, a strait about 1.8 km wide.
For a number of centuries, Brest has been an important military port. Its easily defensible roadstead therefore has a number of military installations, including many remains of old military fortifications and other ruins from past centuries.
Located on an islet just offshore, connected to the mainland by an arched stone bridge, at the northern entrance to the Goulet de Brest, the Petit Minou Lighthouse (in French Phare du Petit Minou) is standing in front of the homonymous Fort. By aligning it with the Phare du Portzic, it shows the safe route to follow for ships to enter the roadstead.
The 26 m high round granite tower, estabilished in 1848, , rise from a circular 1-story stone keeper’s house. Next to the lighthouse is a shorter signal tower carrying radar equipment. It was automated in 1989, and It also has a red signal that indicates a dangerous sector around the plateau of les Fillettes (literally “the girls”), one of the submerged rocks in the Goulet de Brest. Sailors remember this by using the mnemonic “Le Minou rougit quand il couvre les Fillettes“, translated as “the Minou roars when he covers les Fillettes“.
Interestingly, the Petit Minou lighthouse would have taken its name from the Breton word “min”, which means mouth, which would become “kitten” in the plural. And the Breton translation for lighthouse is “Tour Tan”, which mean “Fire Tower”. 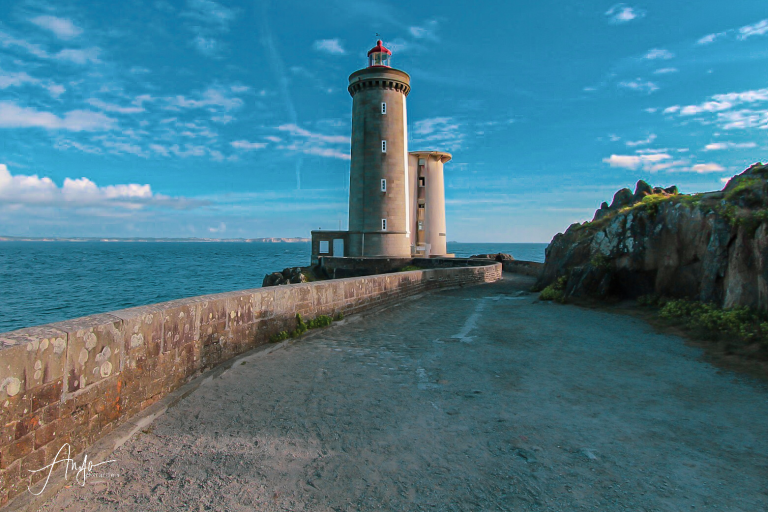