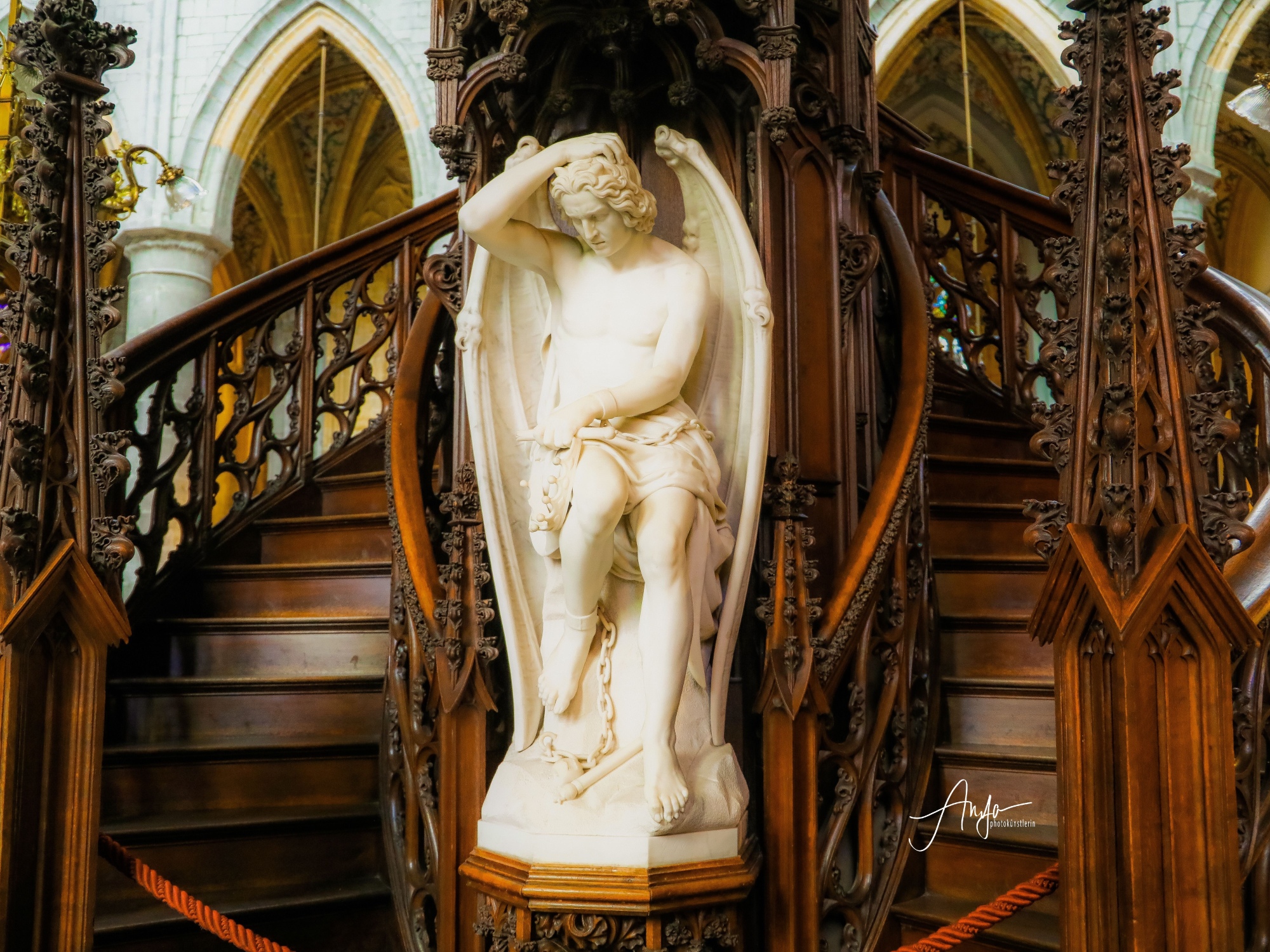 Even though the original structure of St. Paul Cathédrale de Liège goes back to the 10th century, it’s been built over a few times, and today it is mostly comprised of 13th and 15th century architecture. It became a Roman Catholic cathedral in the 19th century due to the destruction of Saint Lambert Cathedral in 1795. The Liège revolutionaries considered it a symbol of the power of the Prince-Bishop. Thus, once the revolutionary mood had passed, another church had to be chosen to replace the destroyed cathedral and the collegiate church of St. Paul, the nearest to the centre of the city, became the current Liège Cathedral. In the midst of this Gothic marvel, filled with works of religious art, sits a stunning statue of the fallen angel Lucifer embedded in the niche of the pulpit stairs.
Know in English as the “Lucifer of Liège,” its real name is “Le génie du mal“ (The Genius of Evil), It was carved by Belgian sculptur Guillaume Geefs in 1848 and it depicts a tortured beautiful young man. Francophone art historians most often refer to the figure as an ange déchu, a “fallen angel”. As idealized as his image is, he is actually a replacement of another Lucifer carved by Guillaume’s younger brother, Joseph, a few years prior. Joseph’s sculpture, “L’ange du mal” (in english “The Angel of Evil”), was installed in the Cathedral in 1842, but church officials removed it from the cathedral because of its distracting allure and “unhealthy beauty”. The local press intimated that the work was distracting the “pretty penitent girls” who should have been listening to the sermons. Thus, Bishop van Bommel soon ordered its removal, and the building committee passed the commission for the pulpit sculpture to his big brother Guillaume, who was commissioned to come up with a replacement statue that wasn’t so…distracting. His version was installed at the cathedral permanently in 1848.
Guillaume Geefs was put in charge of designing the elaborate pulpit for St. Paul’s, the theme of which was “the Triumph of Religion over the Genius of Evil”. Both brothers became famous for creating monumental and public sculptures in honor of political figures, expressing and capitalizing on the nationalist spirit that followed Belgian independence in 1830.
Despite everything, It might be easy to mistake the Lucifer for one of the saints that ring the front of the pulpit, where Peter, Paul, Hubert the first Bishop of Liège, and Lambert of Maastricht reside. However, the details reveal his true identity: the curved walls at his sides are bat wings, the apple, a “forbidden fruit” at his feet has been bitten, his chained toes are sharp like claws, and small tell-tale horns emerge from beneath his hair.
Horns are symbols of the satanic or demonic, even if, in a parallel tradition of religious iconography, its represent points of light. Gods from antiquity who personify celestial phenomena such as the Sun or stars are crowned with rays, and some depictions of Moses, the most famous being that of Michelangelo, are carved with “horns” similar to those of Geefs’ Lucifer.
However, the most apparent icon of L’ange du mal is the placing of Lucifer in bondage, with his right ankle and left wrist chained. In 19th-century reinterpretations of ancient Greek and Christian myths, Lucifer was often cast as a Promethean figure, drawing on a tradition that the fallen angel was chained in Hell just as the Titan had been chained and tortured on the rock by Zeus: “The same Prometheus who is taken as an analogue of the crucified Christ is regarded also as a type of Lucifer,” wrote Harold Bloom in remarks on Mary Shelley’s 19th-century classic Frankenstein, subtitled The Modern Prometheus.
Guillaume Geefs’ addition of chains, replacing the sneering serpent in Joseph’s version, displays the angel’s defeat in pious adherence to Christian ideology. At the same time, the struggle of the tortured genius to free himself from metaphorical chains was a motif of Romanticism, which took hold in Belgium in the wake of the Revolution of 1830. Historically, the Belgians had just secured their own “liberation”, and over the following two decades there had been a craze for public sculpture, by the Geefs brothers and others, that celebrated the leaders of independence.