In the midst of the Belgian Ardennes, on a remote hill overlooking the valley of Amblève and above the hamlet of Borgoûmont in a clearing in the middle of the woods at an altitude of 420 meters, stands an imposing dilapidated structure known to locals as the Sanatorium du Basil. This imposing building of approximately 150 meters in length faces south. While there was once less graffiti here, this abandoned structure is still a mysterious but charming place.
The sanatorium was one of the many health spas that emerged all over Europe to combat the contagious tuberculosis disease. This disease was known as a barely treatable disease that often ended fatally.
Construction of the imposing sanatorium started in the early 1900s, during the golden age of bacteriology, at the initiative of Ernest Malvoz, the then director of the bacteriological laboratory of the province of Liège, and welcomed its first patients in 1903.
It was built of sandstone rubble and half-timbering with cut stone in angles, and its concave architecture was thought to increase the absorption of heat, air and light which was essential for tubercolosis therapy.
For over half a century and out of sight of the general population, this sanatorium hosted thousands of children and adults suffering from advanced tubercolosis. While many of its patients were eventually able to return home healthy, the course of treatment could easily take up to 18 months. It followed an intense and rigid daily routine consisting out of breath fresh air, get plenty of rest, stay warm and eat nutritiously.
The discovery of new and effective antibiotics like streptomycin in the second half of the 20th century significantly reduced the number of tuberculosis cases in Western-Europe, and consequently many of the sanatoriums saw an important drop in the number of patients. So, one by one they started closing their doors.
Since there was no further need for specialised tubercolosis hospitals, the Sanatorium du Basil underwent a much needed renovation and was re-designated as a psychiatric institution In 1978. The centre was finally forced to close its doors due to the high maintenance cost, but for a short time: in fact, between 2010 and 2013, it served as a refugee centre for for asylum seekers for the Belgian Federal Government. Eventually it briefly operated as a nursing home before being abandoned because the cost to maintain the building was too high.
Thus, for more than a century, the Sanatorium du Basil offered a temporary shelter for some of society’s most vulnerable groups: first the deadly and contagiously sick, then the mentally ills, and finally those running from violence in search of a new home.
Now, the building is being reclaimed by nature and it is the subject of many urban legends. Incredibly beautiful outside, but incredibly vandalized and empty inside.
According to local sources, the former sanatorium is currently for sale and for an amount of a just 1.5 million Euro, a new life can be given to this beautiful building… 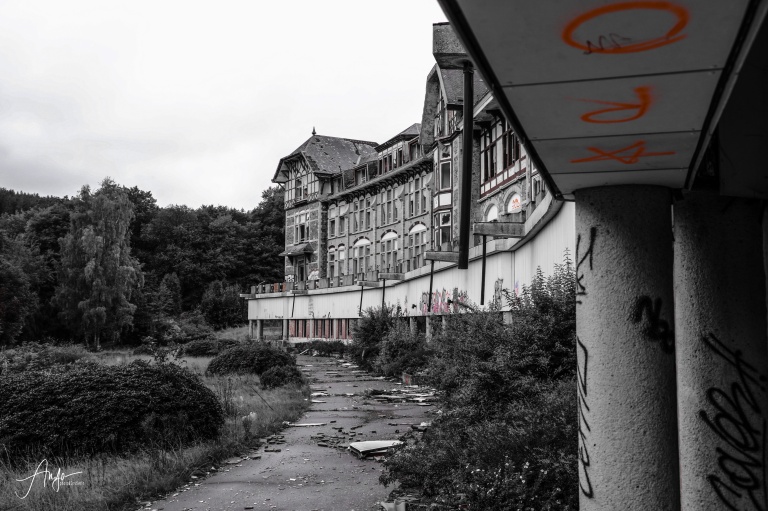