If tyou think “Holland”, you’ve probably already conjured the iconic images of tulips and windmills. And it’s very likely that the windmills you’re envisioning right now are that of Kinderdijk!
Even if it may sound odd the name Kinderdijk translates in Dutch to mean “children’s dike.” According to a local legend, after a particularly terrible flood in the 15th century, known as Saint Elizabeth flood of 1421, the farming region of Grote Hollandse Waard flooded, but the Alblasserwaard polder stayed unflooded. As story goes, when the storm had subsided, a villager went to the dike between these two areas to inspect what could be salvaged. In the distance he saw a lone wooden basket floating in an inundated canal. As it came nearer, he noted some movement, and upon closer inspection, a cat was found trying to keep it in balance by leaping back and forth to avoid that water could flood the cradle. Inside, was an orphaned baby quietly sleeping, totally dry. The cat had kept the baby afloat, safe and sound during its journey, thus giving the world the folktale “The Cat and the Cradle”, in addition to the village of Kinderdijk its name.
Historically, in the Alblasserwaard, a polder in the province of South Holland, problems with water became more and more apparent sometime in the 13th century. Large canals, called weteringen in Dutch, were dug to get rid of the excess water in the polders. However, the drained soil continued to subside, while the level of the river rose due to the river’s sand deposits. Zuid-Holland’s peat rivers ceased to drain, creating a pattern of flooding that devastated the beautiful landscape at Alblasserwaard, which already existed below sea level. Berms were built to prevent flooding, but pumping stations needed to be constructed to continue water flow from low to high areas. So, after a few centuries, an additional way to keep the polders dry was required, and It was decided to build a series of windmills.
Today in the area are 19 historically authentic windmills scattered across Kinderdijk’s canal-riddled landscape. History reveals that the Netherlands’ famous windmills are well-disguised creatures of the sea, without which the nation’s famously innovative water management system would not have been possible. The remarkable contribution made by the people of the Netherlands to the technology of handling water is admirably demonstrated by the installations in the area. Construction of hydraulic works for the drainage of land for agriculture and settlement began in the Middle Ages and have continued uninterruptedly to the present day. The site illustrates all the typical features associated with this technology: dykes, reservoirs, pumping stations, administrative buildings and nineteen beautifully preserved windmills, all still in operating condition, that function as fall-back mills in case of failure of the modern equipment.
The site is included UNESCO’s World Heritage as of 1997 for its “unique character.” Thanks to its truly groundbreaking unification of sea and sky, but also the added bonus of a world-renowned folktale, a visit to Kinderdijk offers something for dreamers and pragmatists alike.

My original article on Random-Times.com. 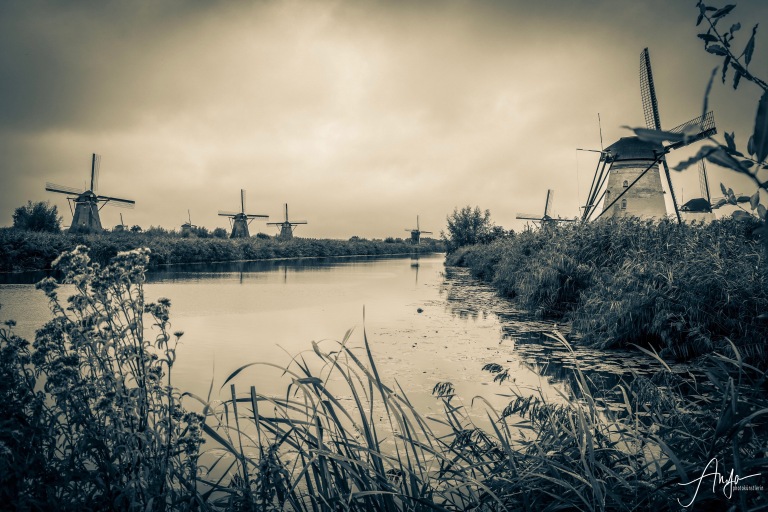