The Capuchins came to Brno in 1604 at the invitation of the Bishop of Olomouc, František of Dietrichstein. For their first monastery, they opted a place in the eastern suburbs of the city, called the Gate of Měnín, and laid the foundation stone in the spring of the same year. The church was dedicated to Saint Francis of Assisi and in 1606 it was consecrated by Cardinal Dietrichstein himself. His decoration was supported by the outstanding painter Kosmas from Castelfranco, a priest of the Venetian province, who created not only the emerging Capuchin churches but also works for the emperor.
However, at the end of the Thirty Years’ War, when the Swedes besieged Brno, (even if in the end the locals won with deception, as the astronomical clock in Brno reminds us), the Capuchins lost their monastery. The military commander Raduit de Souches had ordered all the building in front of the city walls to be dmolished so that the Swedish troops could not find support.
For their second monastery, the Capuchins chose a place in the Coal Market (today’s Zelný trh). The construction lasted eight years (1648–1656) and was accompanied by considerable technical and financial difficulties. However, the land for the new church was donated by a Count and the money for the construction of the monastery was obtained from benefactors. The second Capuchin church was consecrated on May 7, 1656 by the Bishop of Olomouc, Jan Gobbar.
During the 18th century, the building of the monastery under the direction of a local builder and architect, Mořice Grimm, and later his son František Antonín underwent significant structural changes. In 1753, the church was enlarged and the monastery itself was expanded. In 1764 the construction of a new library was completed.
Today, the rosy pink facade of Brno’s Capuchin Church belies the macabre contents of its interior: the mummified bodies of dozens of monks, laid solemnly to rest in the crypt.
Before arriving at the main vault, you must navigate some narrow passageways, displaying stonework and the bodies of dignitaries. The corpse of one woman is frozen in a stricken pose, and a label informs you that she was accidentally buried alive. Such errors were common during a time when paralysis and coma were little understood, and more than one such unfortunate in the crypt met this fate.
However, it is primarily the resting place of the Capuchin monks, who placed their deceased brothers beneath the church over a period of about 300 years. This practice was banned by hygiene laws only towards the end of the 18th century.
However, mummification was never the intention. In keeping with their vow of poverty, the monks thriftily re-used a single coffin time and time again and after the funerary rites, they would move the deceased into the crypt, and lay him to rest on a “comfortable” pillow of bricks. The dry air currents and composition of the topsoil gradually preserved the bodies where they lay.
The result is remarkable: now twenty-four monks lie perfectly preserved, arranged in rows across the floor, all dress in robes and a number are draped with rosaries, or clutch a crucifix. A few rest peacefully, while others have fear or sorrow etched into their papery features.
A warning, common to many such crypts, is inscribed in Czech above their final resting place: “As you are now, we once were; as we are now, you shall be.” 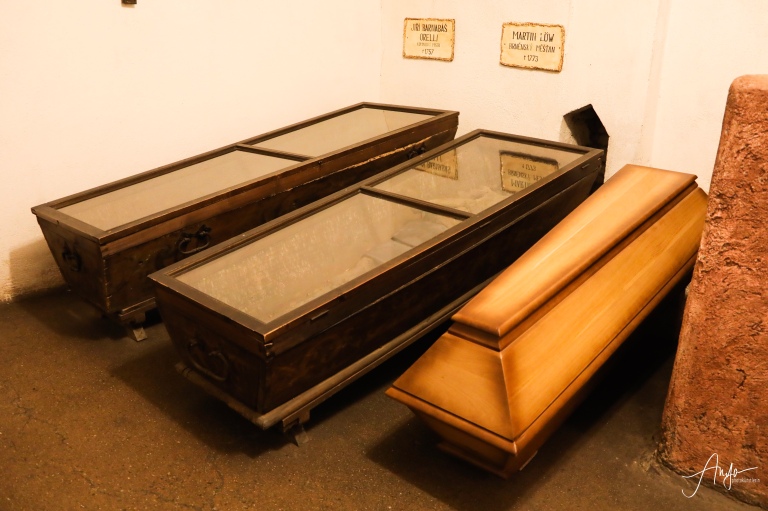