The former orphanage “San Giuseppe”, is more commonly know as “Il Casalegno” because it was built at the behest of Monsignor Casalegno. Giuseppe Casalegno was born near Turin in 1839 by a family of merchants and since childhood showed a generous and helpful spirit to help others.
On May 22, 1864, the Feast of the Holy Trinity, he was ordained a priest and over the years founded several humanitarian institutions.
The construction of the Casalegno Orphanage dates back to 1877 to host the children from Trino Vercellese and Lucedio (where, among other things, is the Spartito del Diavolo) and remained active until 1978.
Beyond the initial architectural barrier (it’s possible enter into the building only throughout a window), there is what was once the laundry, even if there is practically nothing left inside the structure.
The most beautiful part of the building is undoubtedly the immense marble staircase richly decorated with spheres and ornaments, and once also the large window next to, even though now unfortunately it was completely destroyed, so much so that only the skeleton remained intact.
Another beautiful surprise is on the second floor: the chapel with the altar and the two angels painted on its sides still in good condition. It isn’t the same for the ceiling with the decorations unfortunately faded from the passage of time.
Around 2014, for recovery of this building a project had been presented to transform it into a community for disabled young people, but due to lack of funds it has not yet been realized.
According to a my local research, the priests were very strict and used, sometimes, to beat the pupils. During the last few years of its activity, the orphanage became a boarding school in which students returned home on weekends. 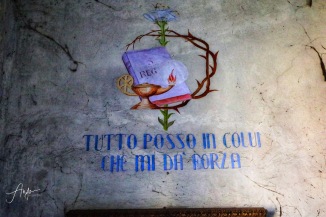